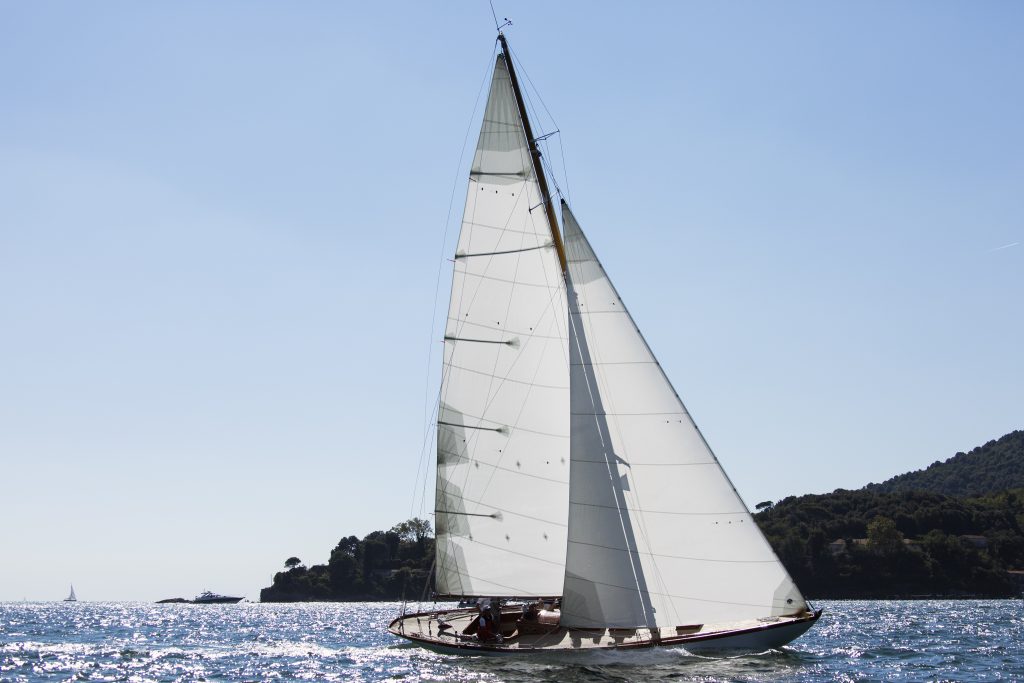 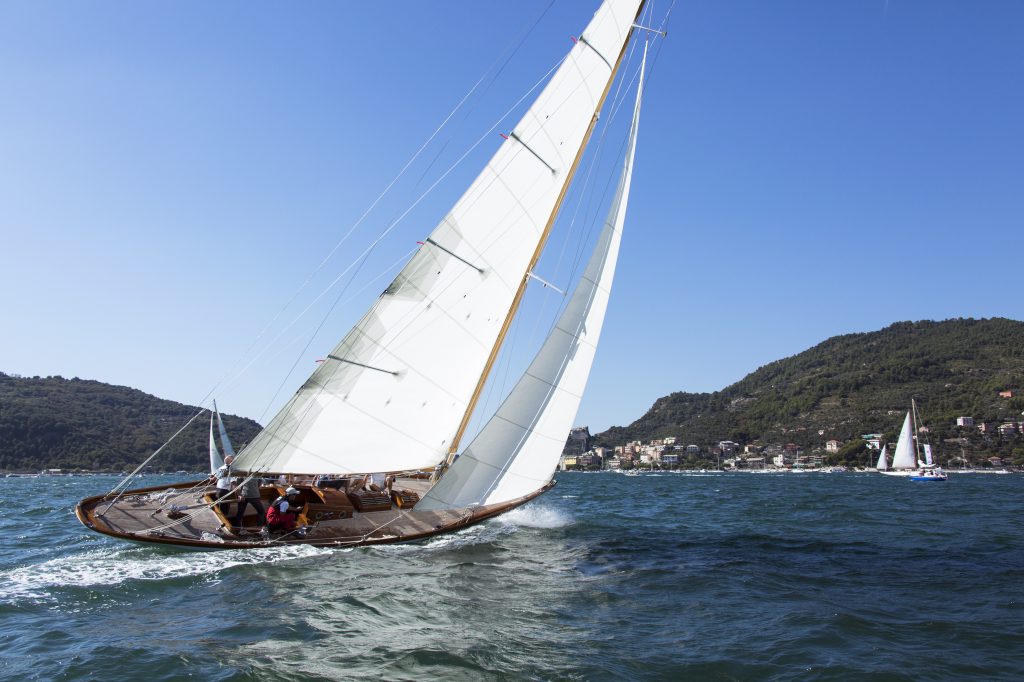 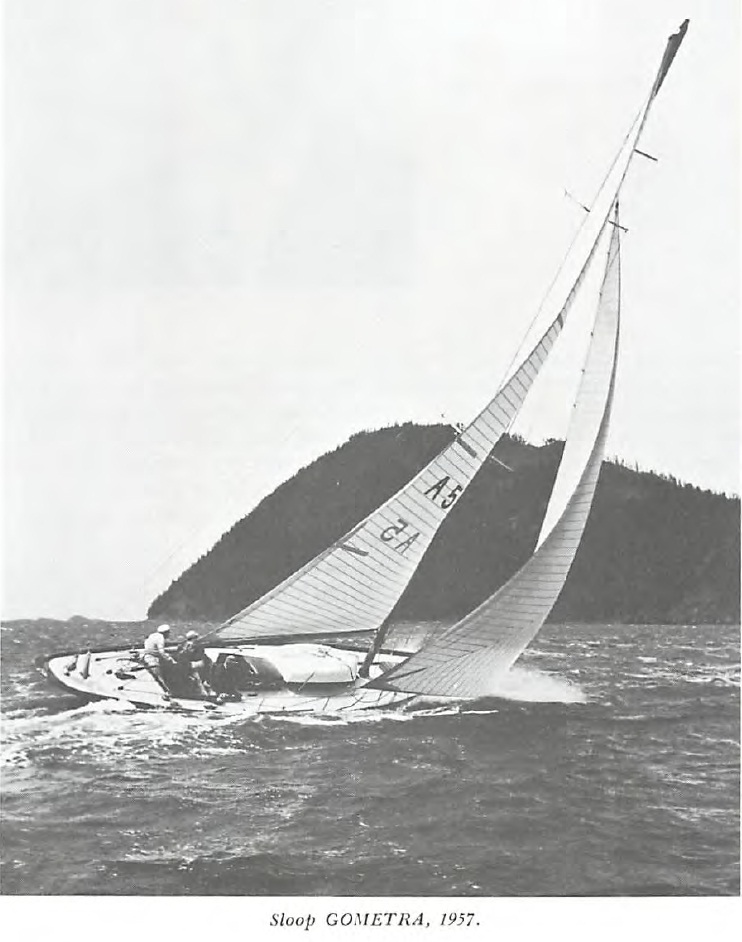 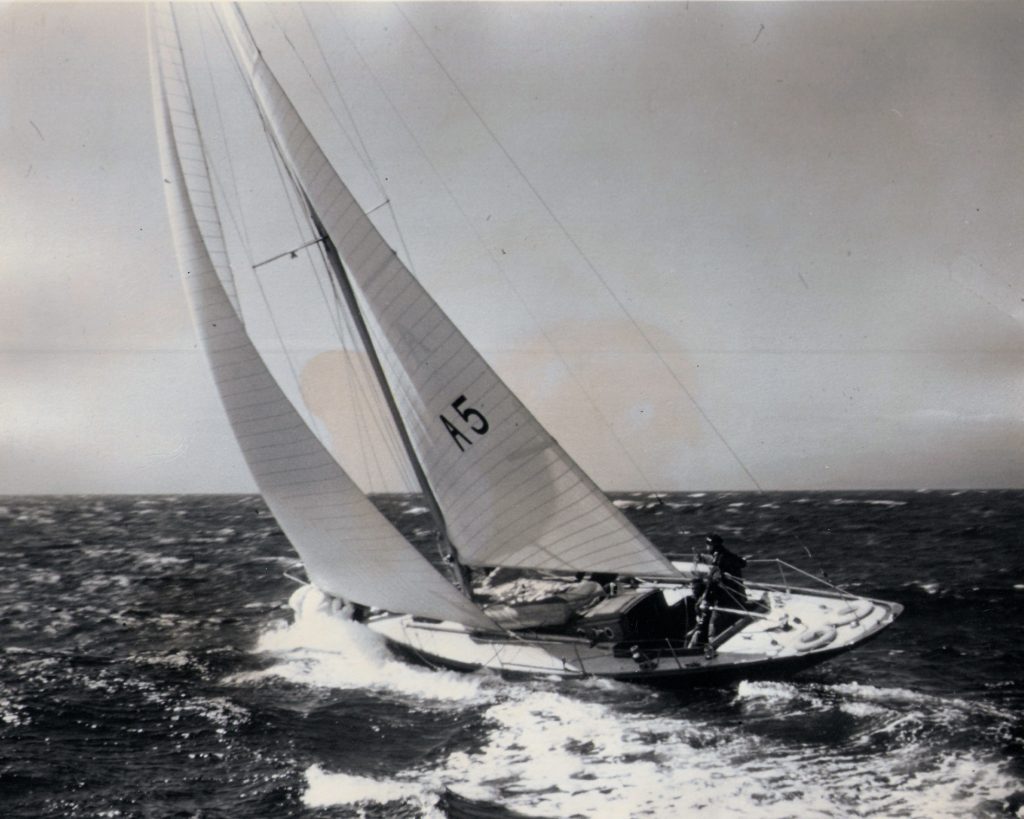 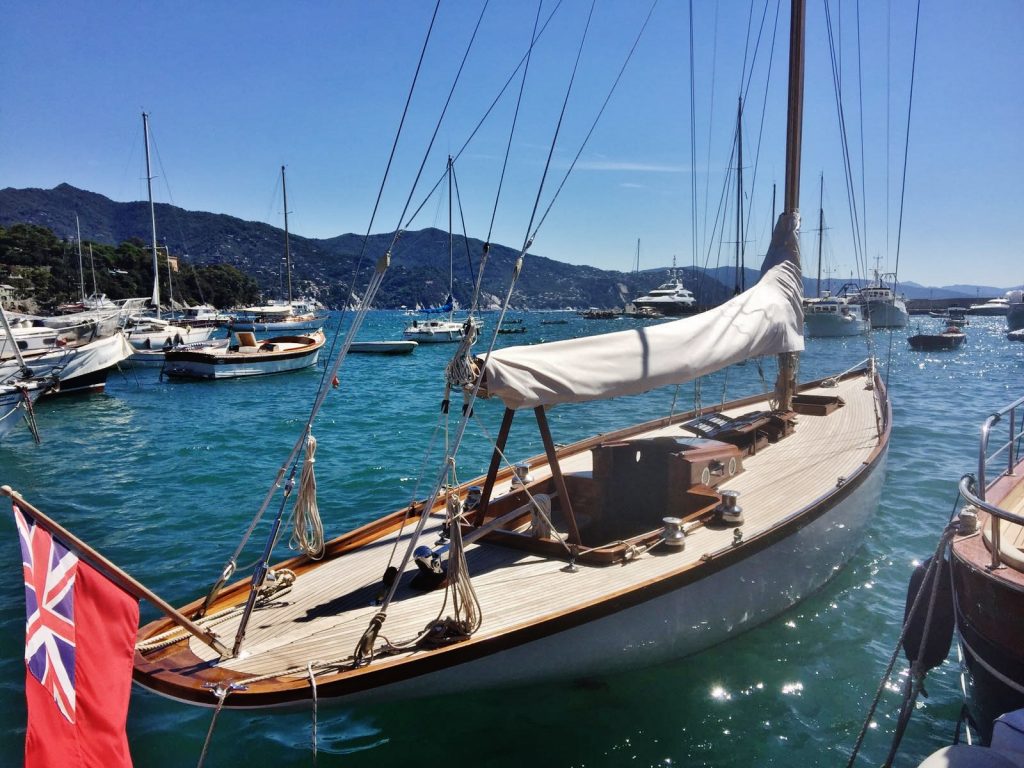 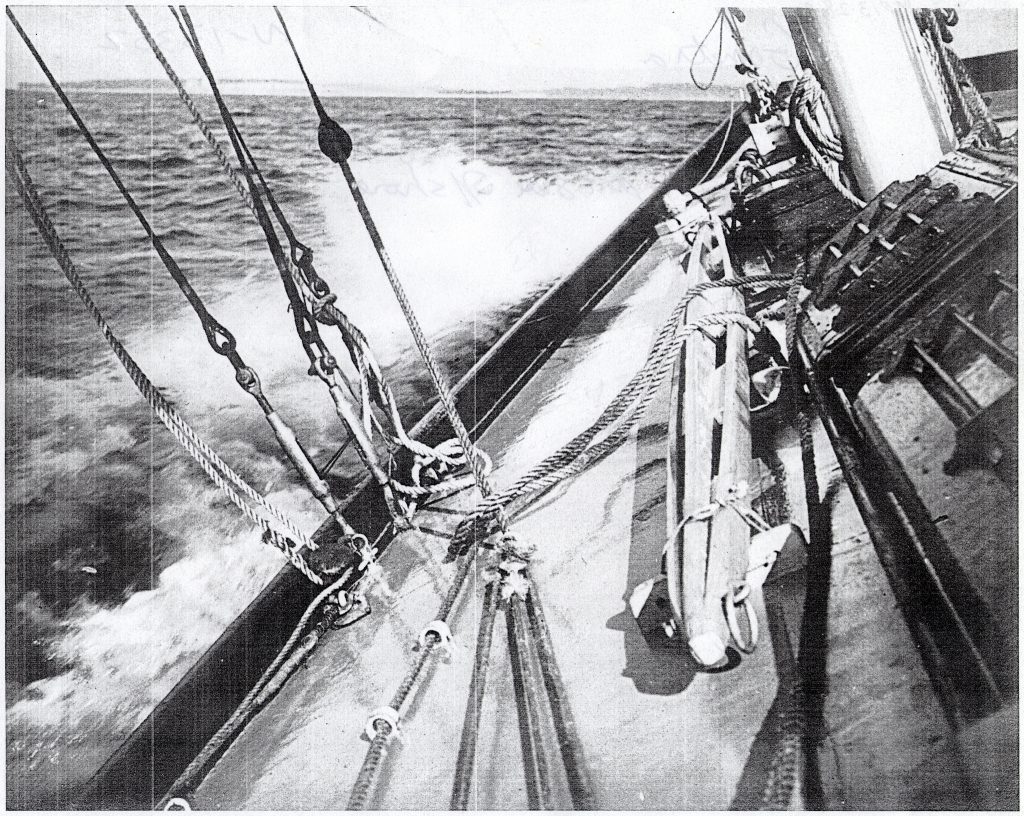 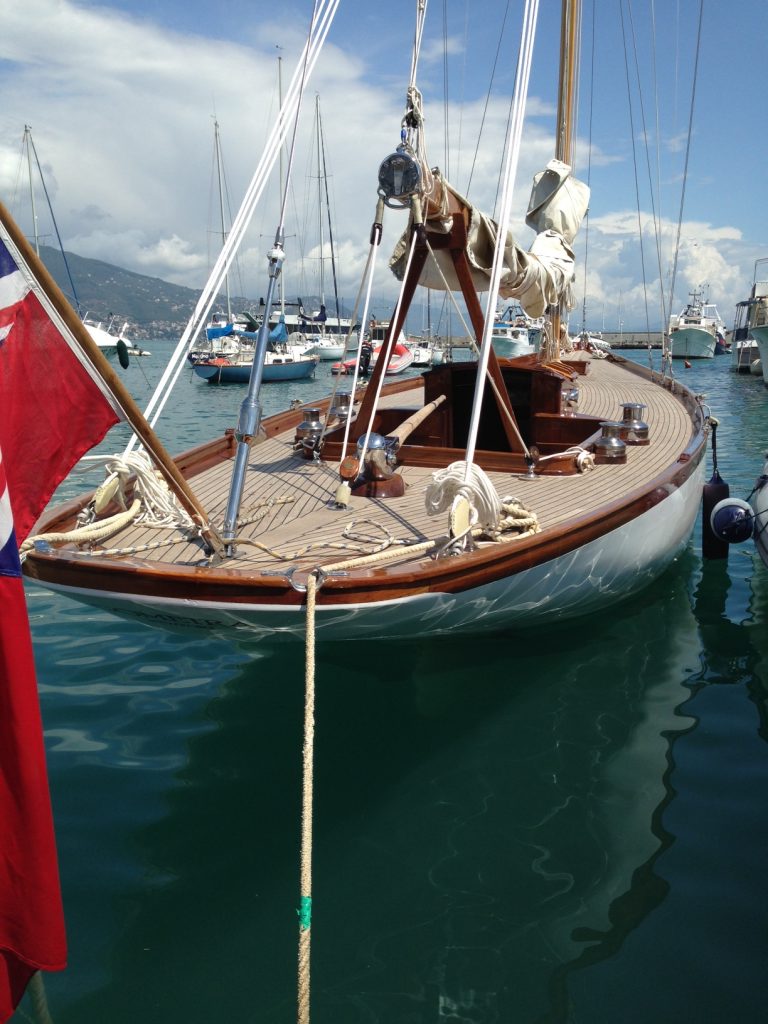 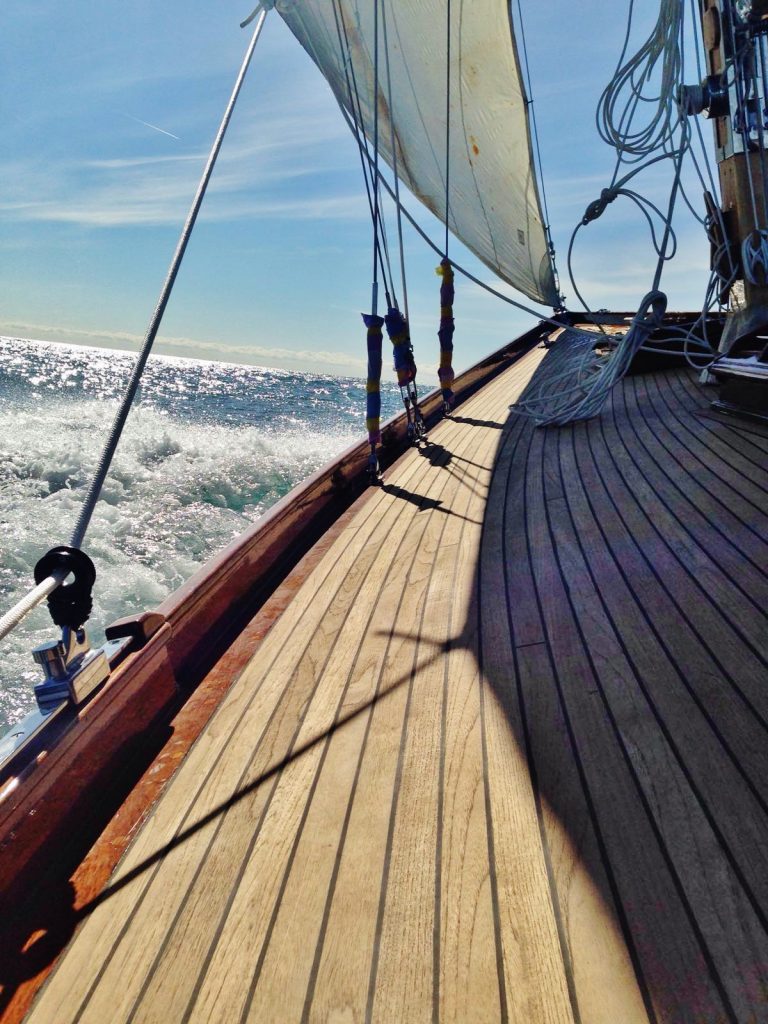 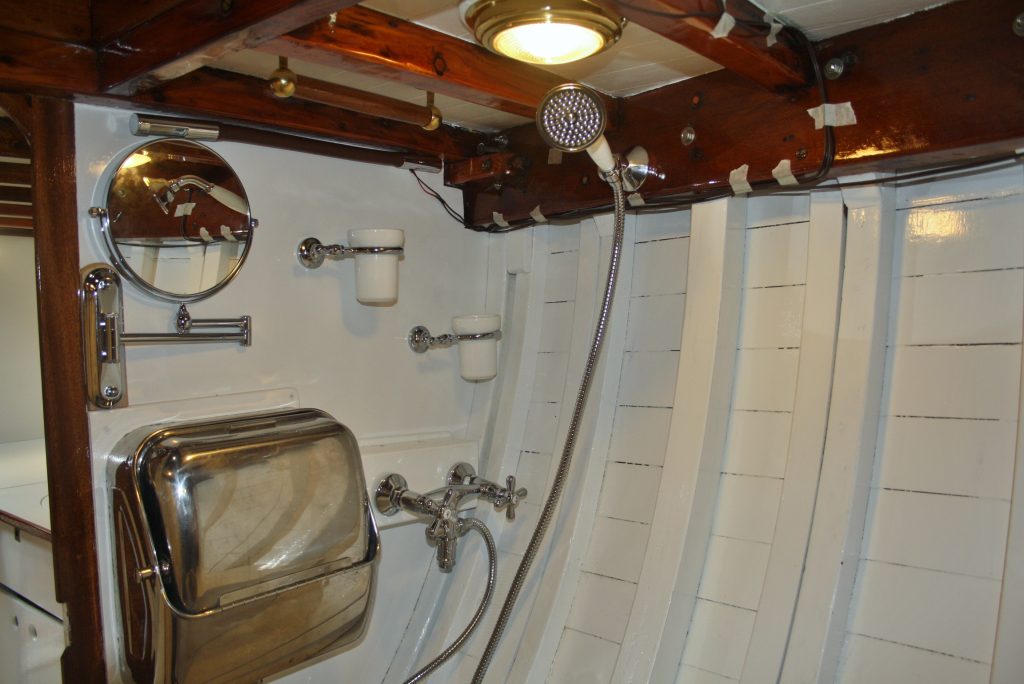 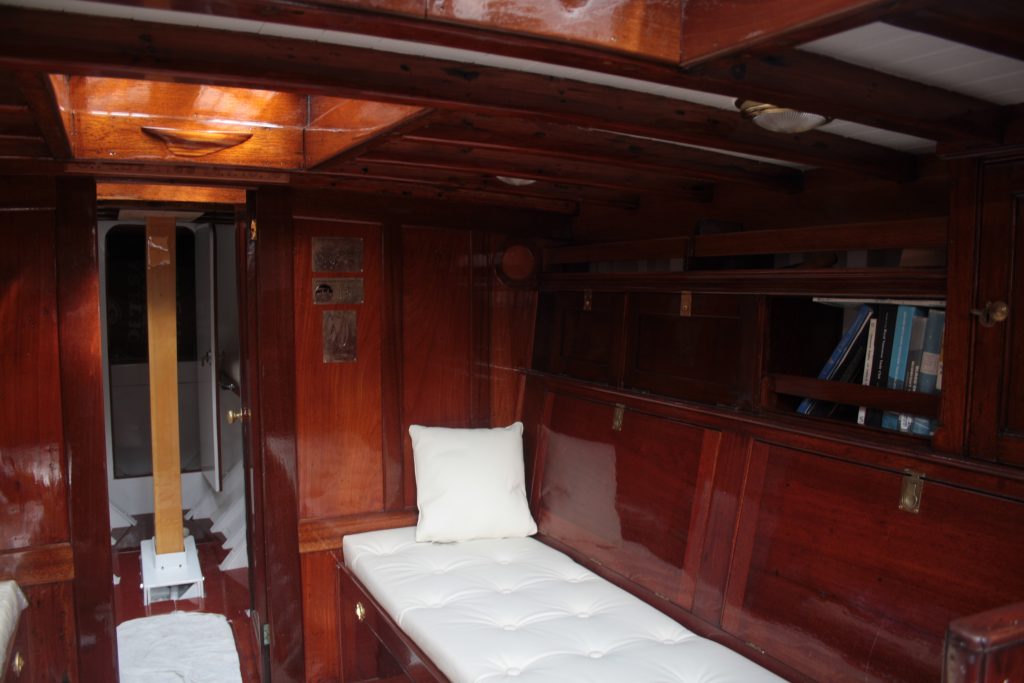 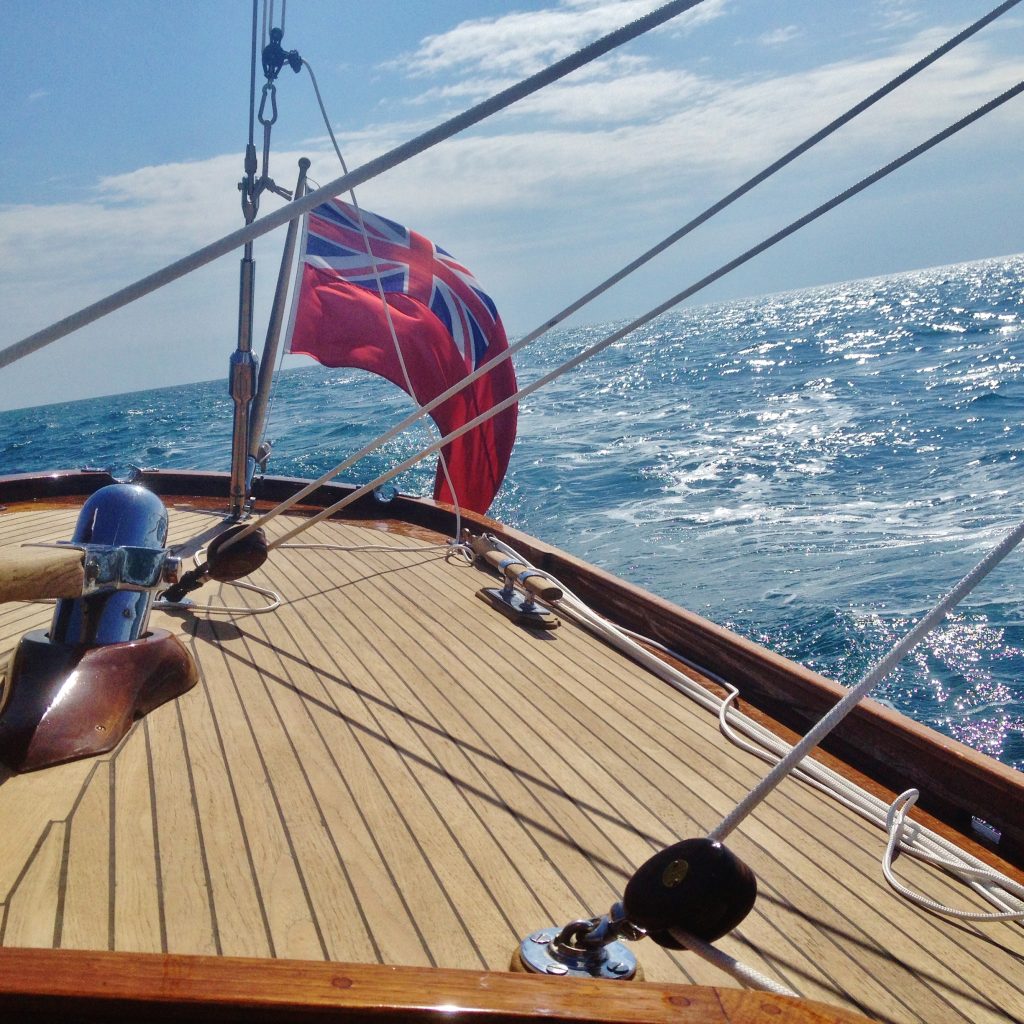 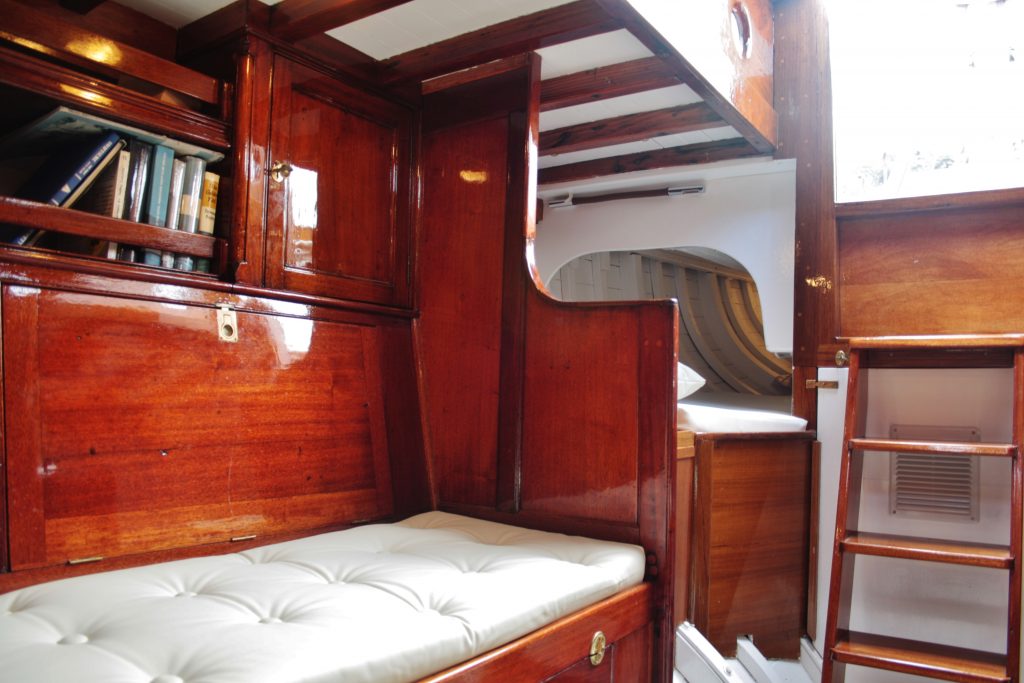 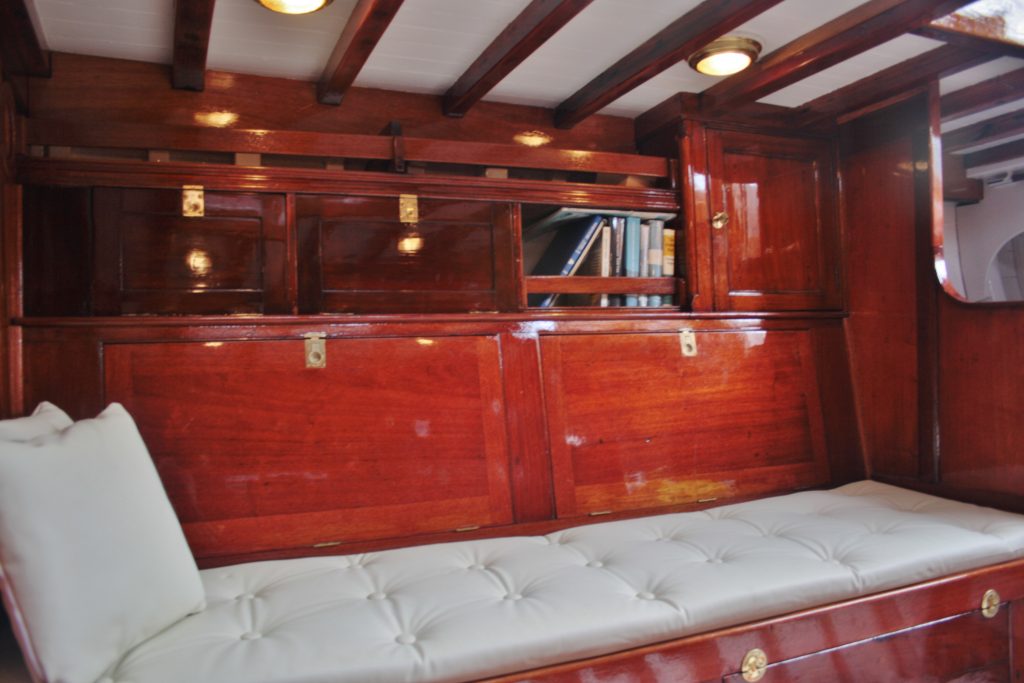 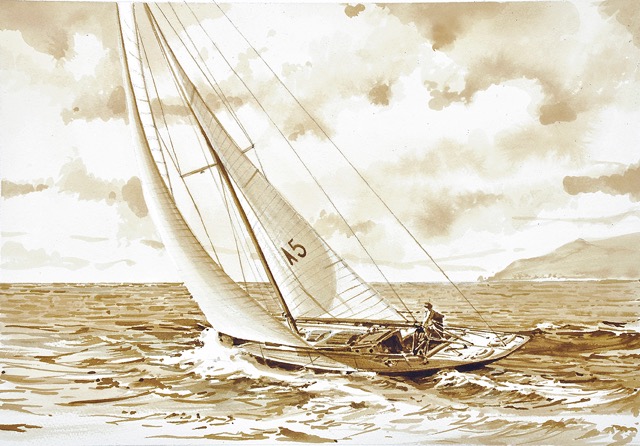 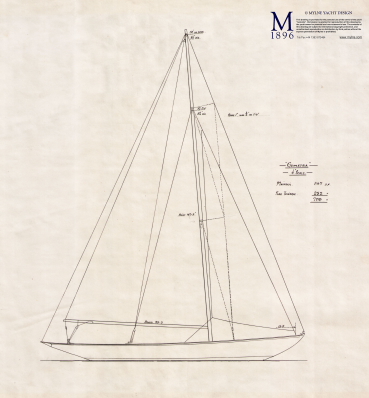 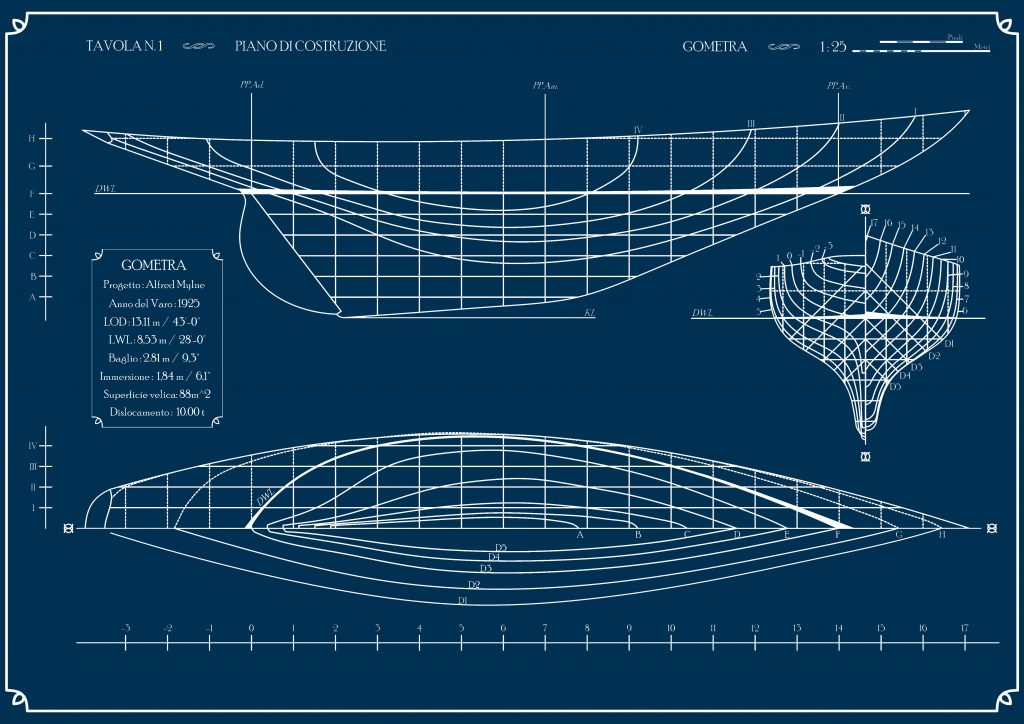 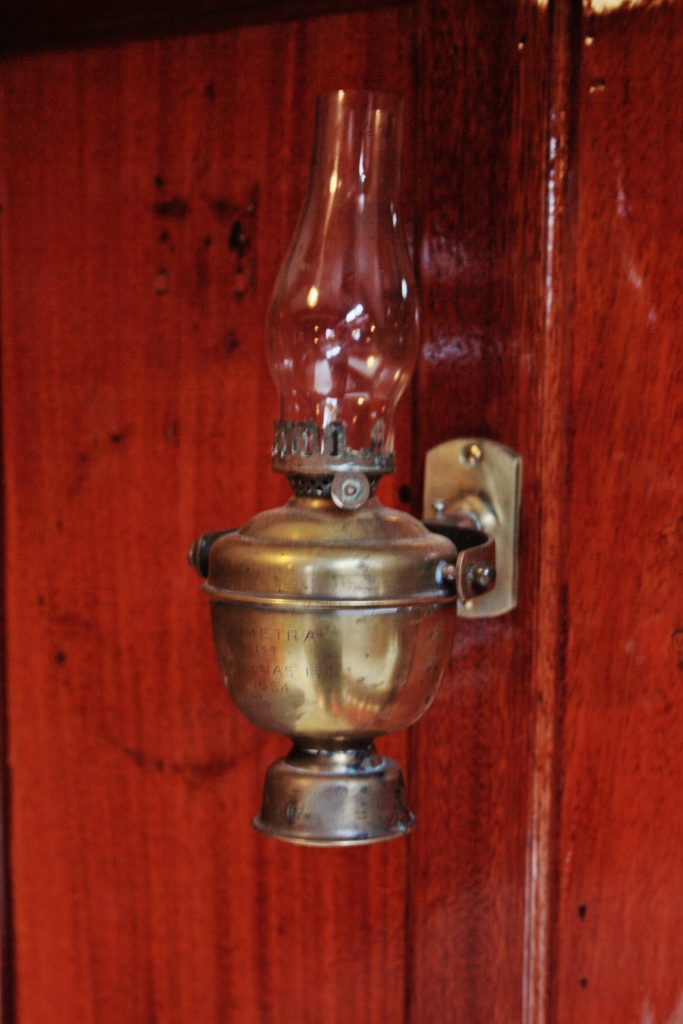 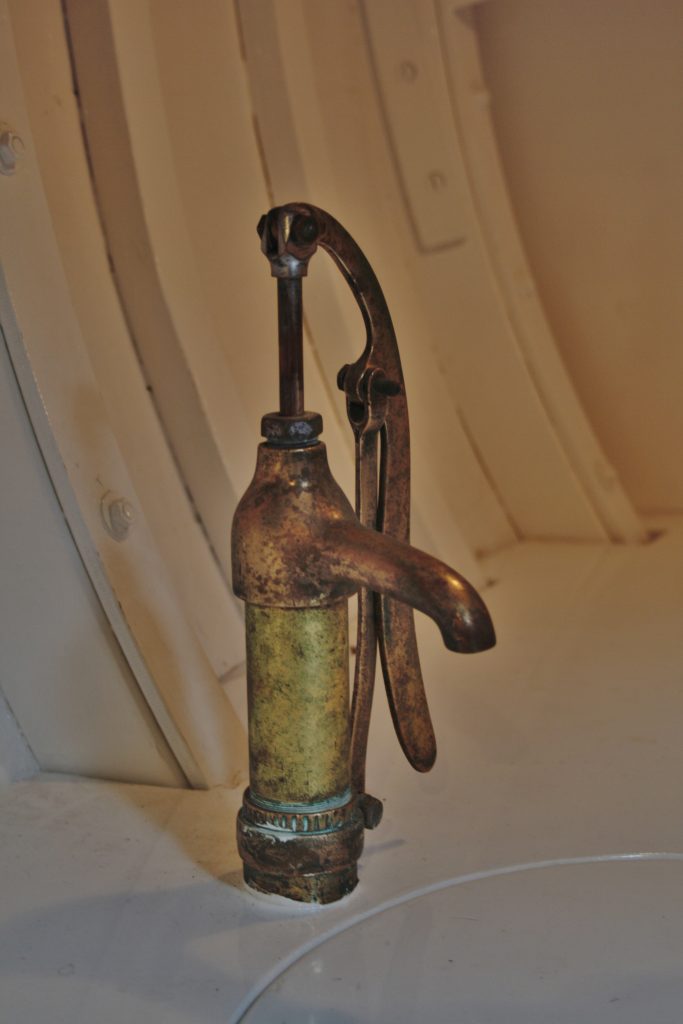 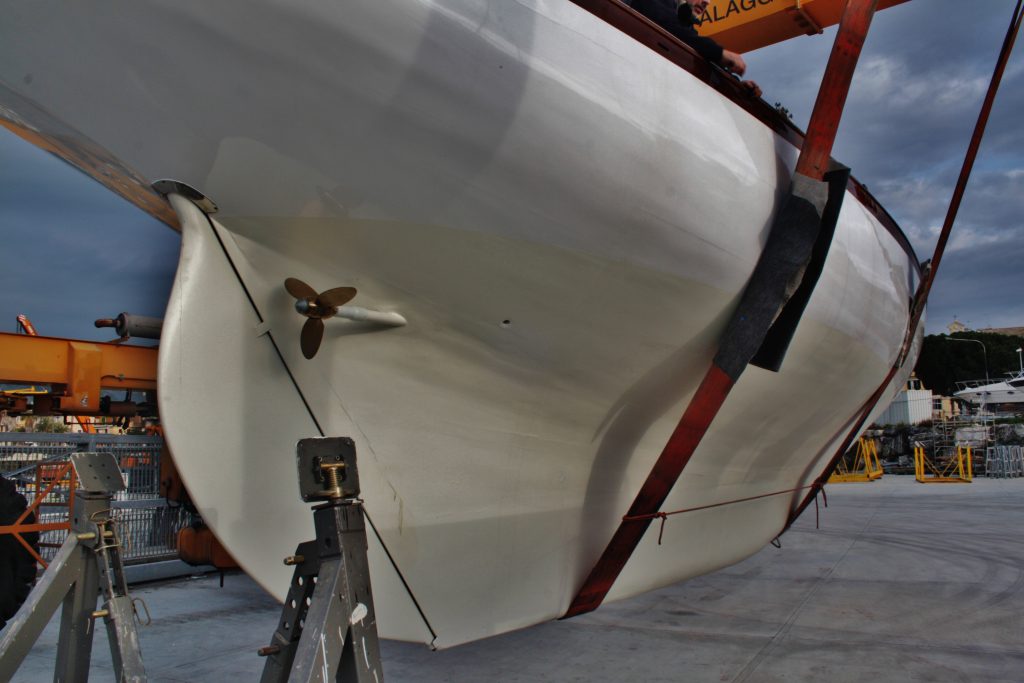 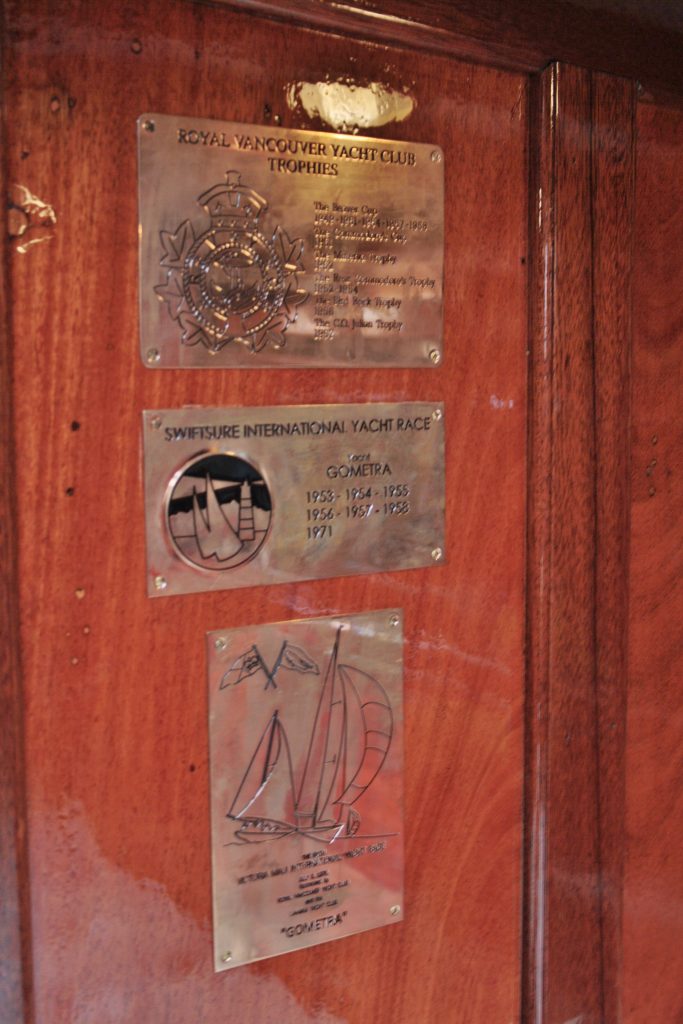 Commissioned to Alfred Mylne by Admiral James Farie in 1925 for British coastal waters, Gometra bears the name of a small island off the coast of Mull. She began her racing career in the American Firth of Clyde based in Port Bannatyne. In 1928, during the West Highland Race to Inverary, Admiral Farie, a widower, met his second wife and in 1930 Gometra first sailed south to Falmouth in Cornwall and then to Lymington in Hampshire where, unfortunately, she proved too big for her mooring on the river.

Gometra was then purchased by Lieutenant William Blaine Luard, a talented sailor, navigator and writer who praised the virtues of sailing Gometra in his book "Where The Tides Meet" . Gometra later became the property of Leonard Reynolds and was moved to the Menai Straits, near Bangor in North Wales. It was probably at this time that some changes were made, and her sides were changed from the original blue to white.

In 1939, at the outbreak of World War II, Gometra was reportedly based in Greenoco, near Glasgow, Scotland, under the ownership of James F. Lang. But when Norway was attacked by the Nazis Gometra's fate became clear. She was chosen to carry the Norwegian gold reserves to safety in Canada. Bra Kra and his crew were ordered to continue sailing to safety in the event that the cargo were sunk by a U-Boat. (Focus)

Once arrived in Halifax and having completed the mission by transporting the precious cargo out of Hitler’s reach, she was bought by the Commodore of the Nova Scotia Royal Yacht Squadron, Ernes A. Bell and began to earn the praise of many sailing enthusiasts including Charles Rawlings. The latter wrote about Gometra in an article for the magazine Yachting Monthly in 1941. Rawlings and the then skipper of Gometra, the famous naval architect William J. Roué struggled not just to rebuild her troubled history.

After the war Gometra was purchased by Gus Ortengren and made her way to the west coast with the Canadian Pacific Railway. In 1948 she was owned by Elmer Palmer and Kenneth Glass and underwent a major restoration. It was during this period that in 1952 the naval architect Ben Seaborn designed the new sail plan and restored the hull to its original deep blue. She spent many happy years as the flagship of the Royal Vancouver Yacht Club participating in the series of annual Swiftsure Race. Often such events as these, saw guests on board.

Elmer Palmer sold Gometra in 1968 to Alec Manson who kept her at the Royal Vancouver Yacht Club until 1973 when he ceded her to the Scottish-born David Millis involved in the trans-Pacific race of 2300 miles from Canada to Hawaii-Maui Victoria in 1976 and Swiftsure races in 1978. He made a small odyssey between Canada, Hawaii and California that led Gometra to the waters of Mexico. In her new base in Baja California, Gometra continued to attract admiring glances and triumph in the home race, Bandaras Bay International Regatta.

The owner’s health problems meant that Gometra was left inactive in the ‘black hole’ of La Paz, "Port of Illusions" where Molly Holt made her acquaintance. After a year of work, despite the interruptions due to hurricanes Ignacio and Marty and with the help of his friend Yohan, Molly, together with two sons Ishbel and Arran and his faithful dog, were ready to leave for a cruise on the Sea of Cortez.

From that moment Gometra has traveled about 2500 miles off the coast of Mexico, Guatemala and El Salvador. She then remained for some years in Bahia del Sol after the sons of Molly were "mutineers" demanding a less nomadic life. In 2006 Gometra was shipped back to Europe arriving in Toulon, from where she sailed to Nice... But that's another story...

A full restoration concluded in 2017 in Italy by one of the most experienced master woodworkers, Giovanni Ambrosetti. Restored according to the original plans with the maximum respect for originality and using the same construction techniques. 80% of original hull and deck, original keel, ballast and most of the inerns. Replaced frames, fore and sternposts, rebuilt the cockpit but saved original deckhouse, skylights and most of the deck hardware. Rig is the second version designed by A. Mylne as was found and restored. Gometra is now dressed with a new NorthSail setup that includes mainsail, 1 light genoa, 1 heavi genoa, 1 jib, one stormjib and a spinnaker.

In addition to the photogalley on the website you can find the restoration ones here https://www.flickr.com/photos/proust2000/collections/72157605584154014/

At the time of its discovery Gometra had a Yanmar diesel engine of 35 HP that appeared in poor condition and after a check turned out to be useless for the purpose. It was then that the idea was born to give Gometra an innovative propulsion drive that would include an electrical solution for a clean mode of navigation.

It was now late 2008, and hybrid technologies were beginning to have some weight in the field of the automotive industry, but the marine solutions especially for small dimensions were still very rudimentary and not especially suitable for installation on a vintage sailing vessel. Then came the idea of ​​relying on a fully electric propulsion with the full knowledge that this choice would have imposed necessarily a loyal return to the adjective "auxiliary". The engine, whatever it was, would then serve in the maneuvers and to make short trips, certainly not for long cruises as it tends to do more and more in modern yachting.

The choice fell on a DC motor for the simplicity of the supply system and reduced power requirements. Other evaluation criteria included the weight and dimensions reduced to fit the internal geometry of Gometra's hull. All this led to the identification of the motor L-200 D135 RAG Lynch Motor Company Ltd.
Having taken the road of electric propulsion it was chosen not to make use of an endothermic generator to produce the energy, this in order to keep the system fully carbon-free and because such a solution would partially undermined efforts to weight reduction and noise.

To power the electric motor was solely on energy stored in a bank of batteries. However, for the power supply of the electric motor it required a power source more consistent than what is normally installed on pleasure craft, for reasons of energy density, the overall dimensions and weight, lithium technology was the only possible choice. The product currently most advanced in this field for marine applications has proved to be lithium-ion battery line from Mastervolt.

The selected engine requires a power supply of 72 Volts, therefore, the chosen solution, compatible for dimensions and capacity, is to install three batteries Mastervolt MLI Ultra 24/5000 in series.

Gometra was born as a private yacht for retired Royal Navu Rear-Admiral. She changed many owners and always scored well in the regatta she took part. Travelled to Canada during the WWII with a secret mission involving Gold reserves and remained in Vancouver as flagship for many years collecting a lot of important results in many famous regattas for over 50 years. Took part at the Vic-Maui Regatta in 1976 and sailed on the pafic coast of North and Central America. Back in Europe in 2003 and owned by actual owner till 2007, undergone a full philological restoration.

Gometra is built in Norway pine on acacia (bent) and Iroko (steamed) frames. Norway pine also for the structural deck covered with an 8mm teak layer. She has the original Douglas fir mast.