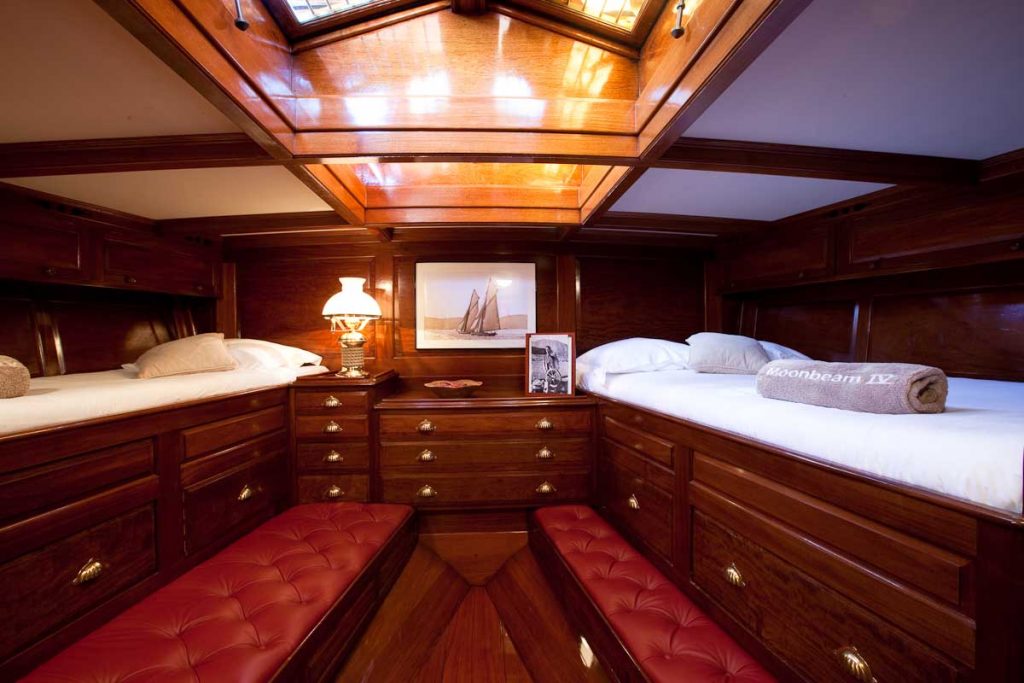 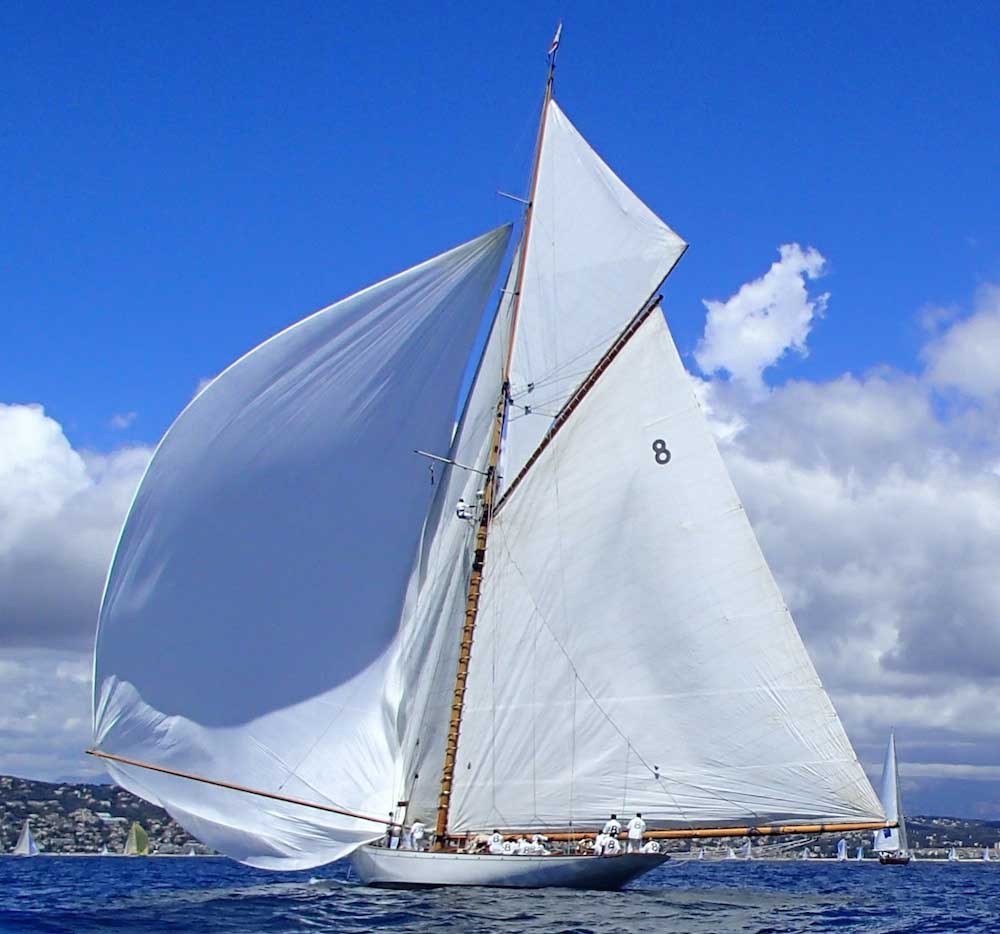 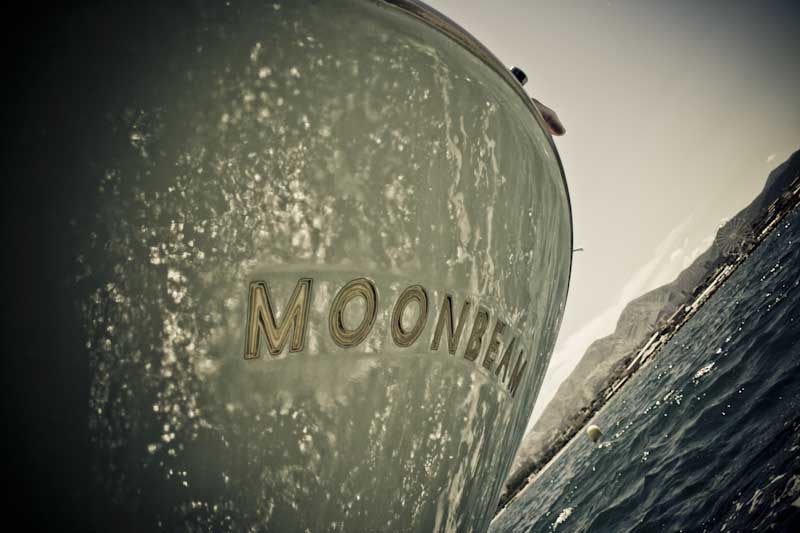 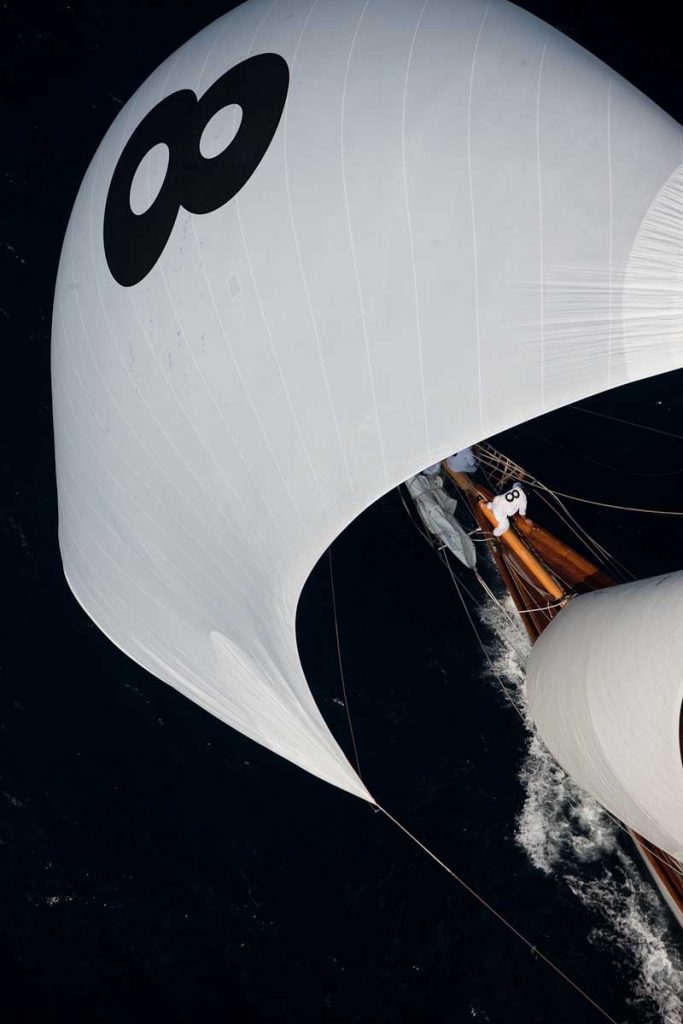 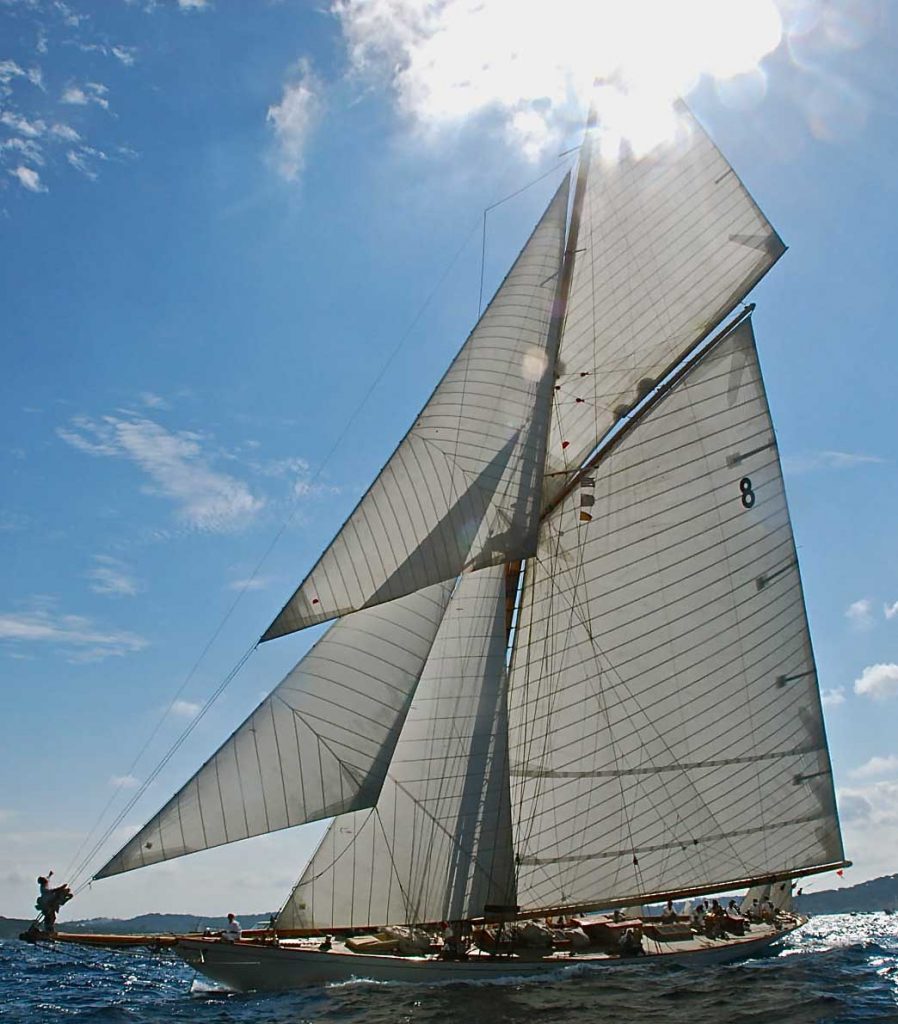 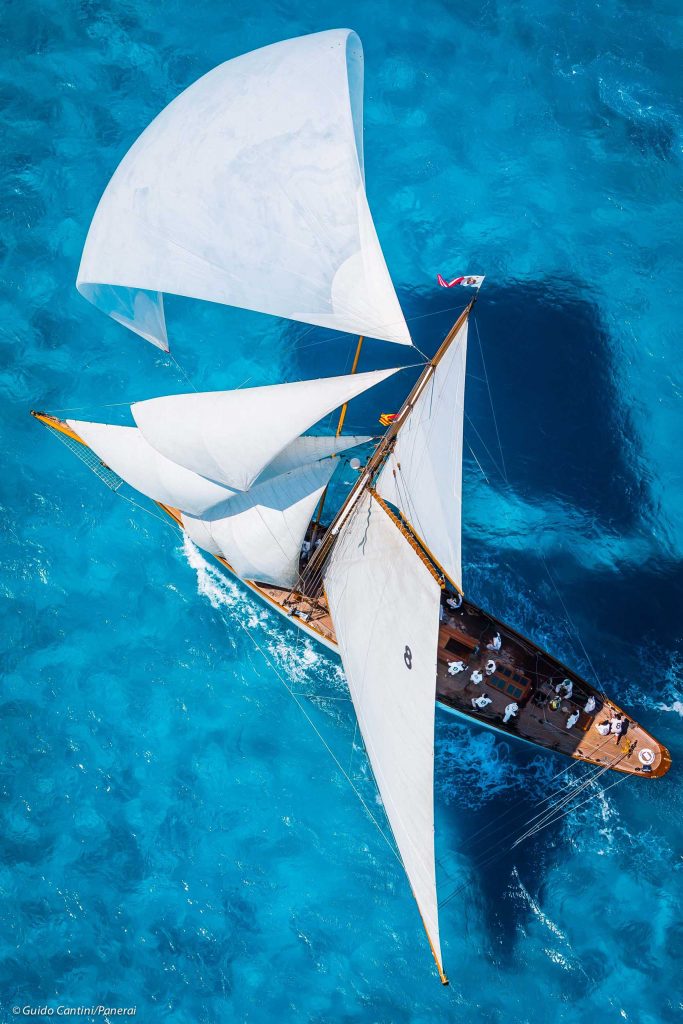 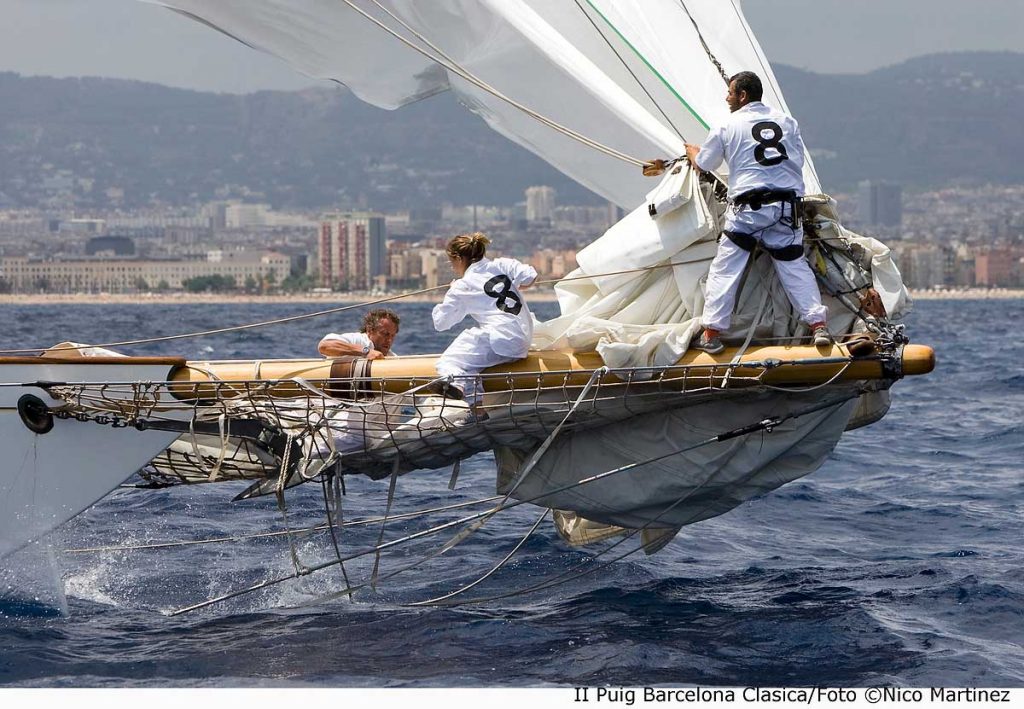 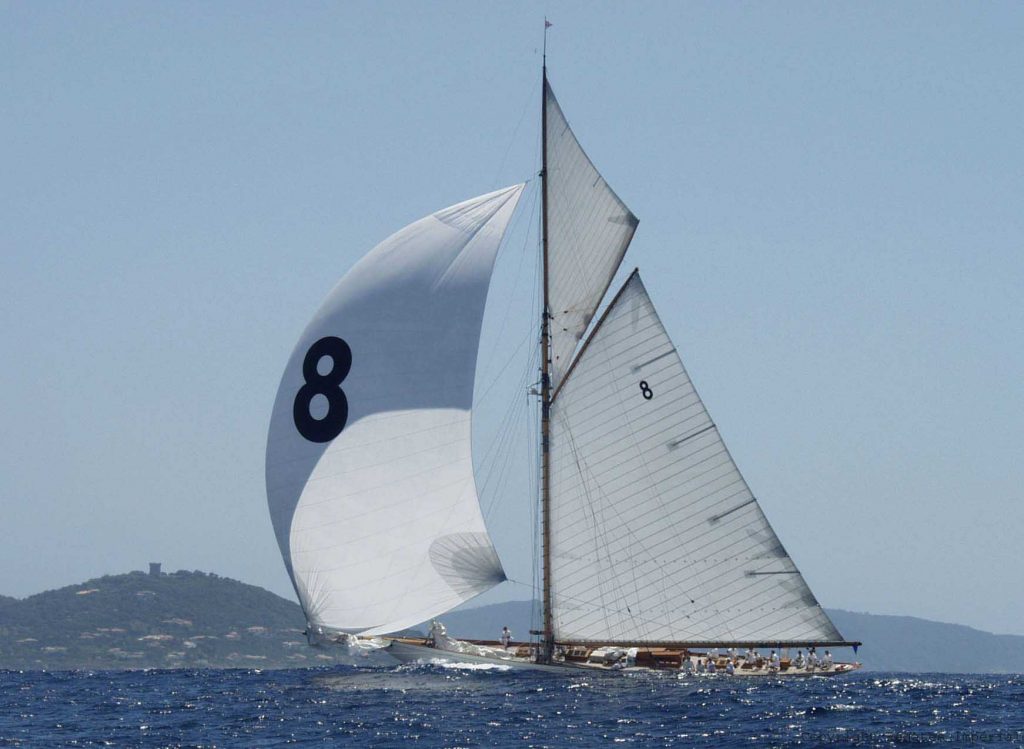 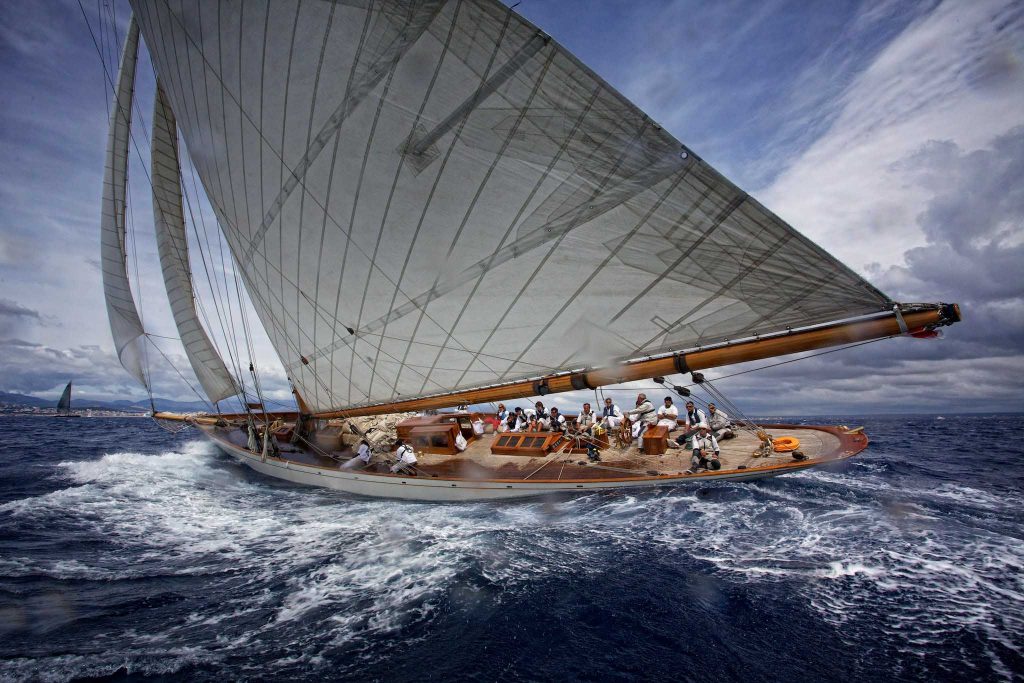 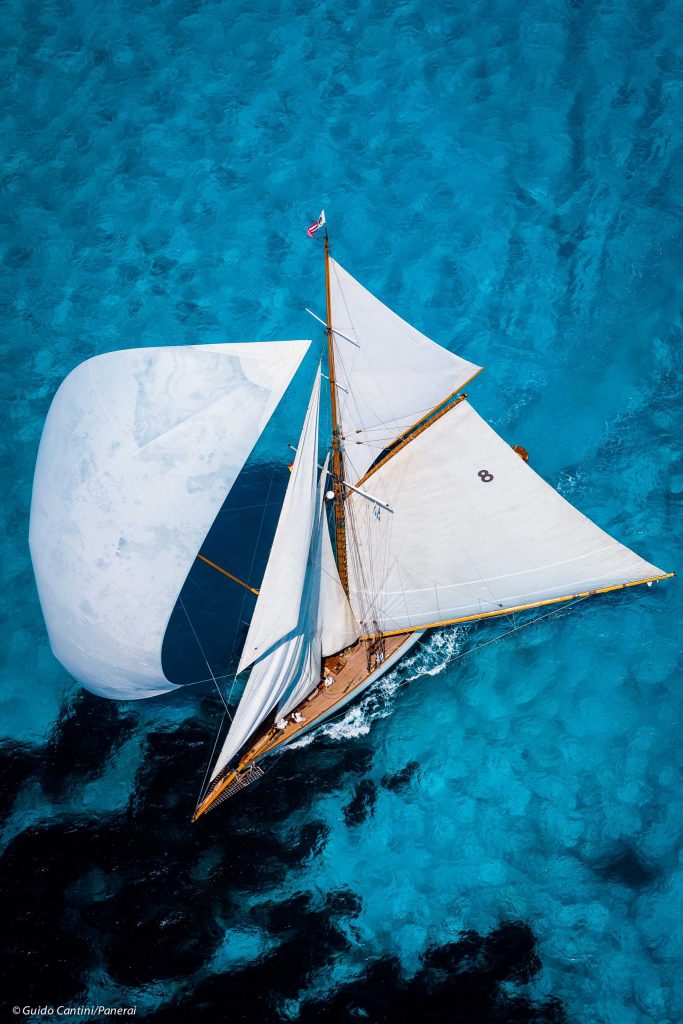 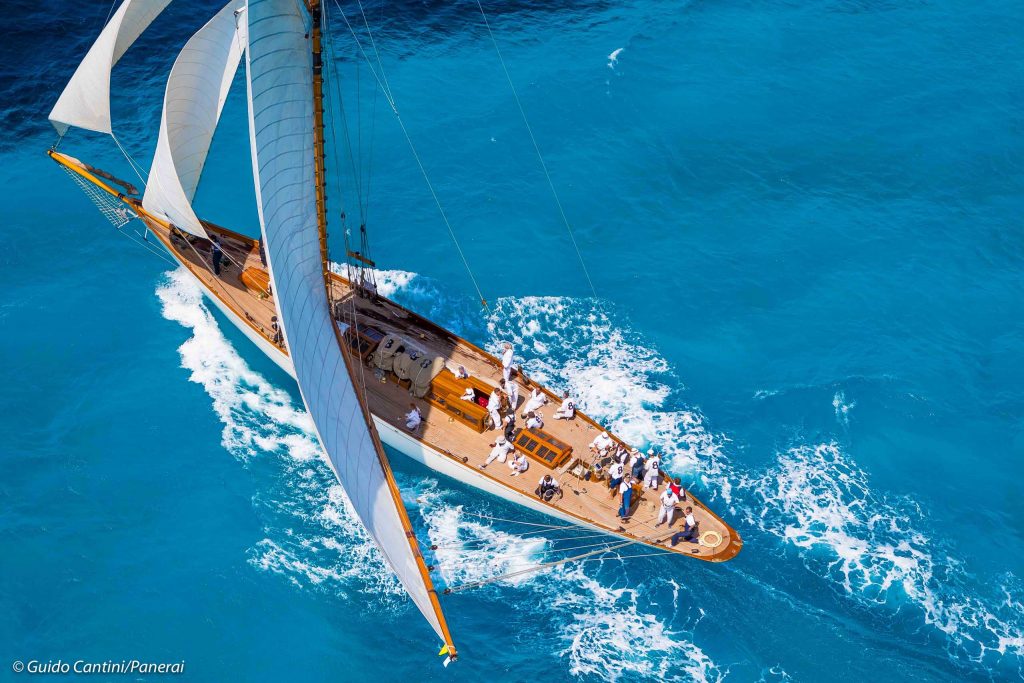 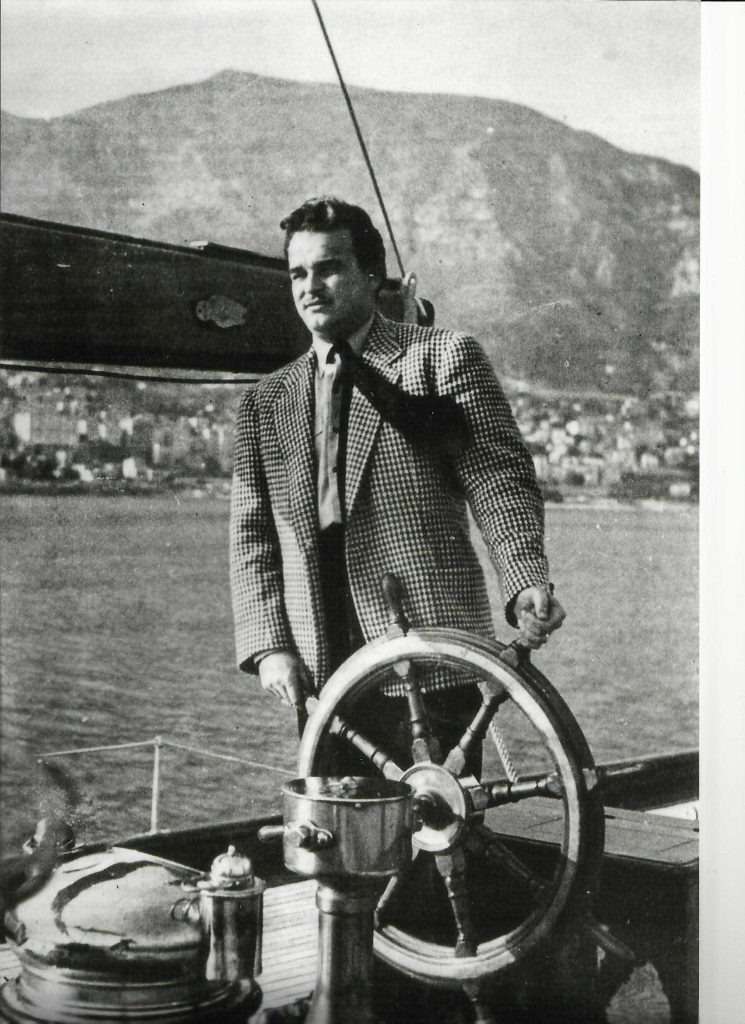 Johnson sold her in 1926 to fellow Royal Yacht Squadron member, Henry Sutton. The new owner converted the rig to the towering marconi design, keeping her in line with the modern competition and the re-established ‘Big Class’. Her rivals included ‘Britannia‘, Lulworth‘ and ‘Candida‘. Ten years of racing followed with many victories but Moonbeam eventually left the racing scene after being out -run by the ‘J’ Class yachts in the 1930’s and, more importantly, due to the onset of war.

In the years after the war a bermudan rig was fitted for ease of handling while cruising and Moonbeam was located in the Mediterranean along with many of her peers. In 1950 Prince Rainier of Monaco bought Moonbeam and went on to own her for many years. She was renamed ‘Deo Juvante’ – the Grimaldi family motto – and took the newly-weds, the Prince and Grace Kelly, on their honeymoon.

In the 1960’s she was sold to Count Hannibal Scotti who installed 2 Rolls Royce engines and continued to use her for cruising in the Mediterranean. In the subsequent years she became part of the bustling charter trade being worked hard with only the minimum upkeep.

In 1995 she was found by John and Françoise Murray in Greece, who fell in love with the vessel and planned out the impending restoration. Moonbeam arrived in Yangon of Myanmar (Burma) in April of 1999 and started what was to be a three year restoration involving up to 50 local Burmese. On the 19th July, 2002, Moonbeam left Yangon on her maiden voyage of over 700 miles to Langkawi, her final destination to be Auckland for the ‘Louis Vuitton’ Challenge and the ‘America’s’ Cup.

With her return to the seas Moonbeam is used for chartering and is a regular on the Mediterranean regatta circuit competing with her older sister, Moonbeam III. In the winter of 2005-2006 she was taken down to Tunisia to have an overhaul as Moonbeam did not appear to be performing to her age old reputation, especially when put up against the likes of the newly restored 19-Metre, Mariquita. Her copper has been stripped off and the hull faired to the modern streamlined finish of antifouling and some weight has been added to the keel to increase her stability. In 2006 Moonbeam attended the Mediterranean classics once again with a significantly improved overall performance.

The building of Moonbeam IV was started in 1914 for Charles Plumtre Johnson.   This was to be the largest of the four Moonbeams he commissioned and was not completed until after the war in 1920.   She then went on to win the Kings’ Cup, that was held on the Tuesday of Cowes Week every year, in both 1920 and 1923.

Uffa Fox described her, ‘No matter whether she is under way or at anchor,  Moonbeam is beautiful to look upon and, combining the speed of a racer with the comfort of a cruiser, is a vessel any seaman would be proud to own’.

Teak planks on steel frames (90% of the hull is the original Burmese teak) with new bronze fastenings (2001). Other original parts include the keel, rudder, dead wood and rudder post. There is a new teak deck layed on cedar and new spars made from Alaskan spruce. The engine is a Lehman 355hp.